Faculty members Lee Mirsky and Catie Mino are published in NGLC in an article discussing twenty-five of our student journeys to fabricate problem-solving devices for their community partners through Project Invent.

Published on Next Generation Learning Challenges on July 26, 2022

Phone calls, FaceTimes, text messages, and Zoom. For the past two years, these modes of communication were our lifelines as we spent time away from family, friends, and colleagues. This period of isolation expanded our communication to people with modes we had seldom used before. Catie has vivid memories walking through the hilly and winding streets of her neighborhood recounting her very few daily activities to friends several time zones away. Lee found connection in playing card games with her family over Zoom. These dialogues and connections were vital to our well-being and remain part of our lives to this day.

Communicating with others brings joy, sparks ideas, and cultivates relationships. Seamless conversations and discussions are integral in conveying information from person to person. As speakers, we want to be understood and heard. As listeners, we want to be able to accurately and clearly receive information.

A cornerstone of Project Invent is to utilize the power of conversation to develop relationships that build empathy, foster understanding, and ultimately lead to improving our day to day experiences. Twenty-five 9th–12th grade students at our school, Marlborough, participated in Project Invent as an after school program. In October, our student teams were introduced to community partners—Megan, Ms. Craft, and Ellie. We connected to our community partners through relationships with Project Invent and Marlborough’s Community Partnerships department, and you’ll learn more about each of them below. As we set up the first Zoom meetings, we considered many factors to ease communication: Should each person join Zoom individually? Would it be helpful to not wear a mask? How will we introduce ourselves? Each team prepared questions and transitions to establish a clear cadence to the interviews. Although the conversations might have been slow to start, by the end of each session, the teams were trading stories with their community partners about the computer game Animal Crossing, fashion trends, and travel expeditions.

Here are the stories of four teams and their journeys to fabricate problem-solving devices for their community partners. 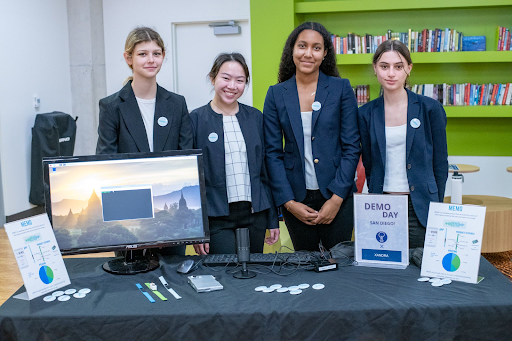 After their first meeting, Team Xandra was drawn to the vibrancy and energy of their community partner, Ms. Craft. After an accident, Ms. Craft often found herself leaving behind important objects, missing appointments, and not being able to remember essential information. However, her zest for life was still present—she is drawn to all things fashion and loves to see and experience the world. Inspired by a travel journal, Team Xandra wanted to make it easy for Ms. Craft to be able to record and retrieve all of her daily appointments and musings.

Team Xandra determined that a wearable recording device would suit Ms. Craft and her needs best. However, they did not want it to be a simple audio recording and playback device. They wanted Ms. Craft to be able to speak into the device and have those notes stored as text in an app that she could access later on in the day. They embarked on a journey to learn about speech-to-text conversion, and they quickly discovered that it was a big undertaking. With help from Marlborough’s computer science teacher, the team explored open-source options. They discovered a speech-to-text solution that can be run on a Raspberry Pi called DeepSpeech. This was encouraging, as it would be a low-cost and accessible track for them to pursue in a rudimentary prototype. The team was successful in running DeepSpeech on a Raspberry Pi and demonstrating its viability to perform speech-to-text conversion in real time. 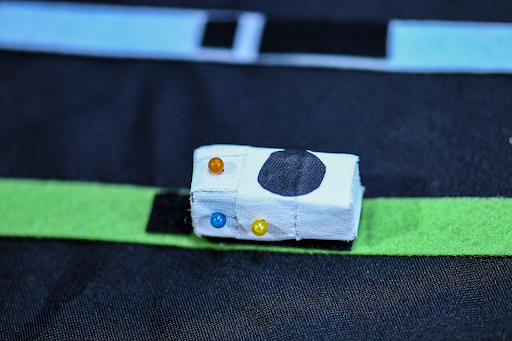 Taking into account Ms. Craft’s style savviness, Team Xandra added customizable bands to their device design. The bands were small and sleek to complement any outfit. They also intended for the color and fabric of the band to be interchangeable. Ms. Craft would now be able to record messages, appointment details, and reflections with ease and flair.

Wrapped Up in You

Much like a first date, Team Nova was apprehensive prior to their first meeting with their community partner, Ellie. They wondered if they were asking the right questions, if they would be able to maintain the conversation, and if they would feel a connection. As soon as Ellie and her parents popped onto the screen, all of their fears subsided. Ellie is a twelve year old with cerebral palsy. Team Nova was immediately drawn to her positive and vibrant attitude, love for animals, and willingness to share her life with the team. At the beginning of every meeting, Team Nova established a routine where they shared one of their favorites. Their favorite color, favorite food, and favorite animal. These exchanges might not have seemed like they were important to their product development, but ultimately the bits of information that they learned not only strengthened their connection with Ellie but also found their way into their final product design.

One difficulty that Ellie mentioned during the series of interviews was the discomfort that she felt after undergoing physical therapy. She noted that she experiences soreness in her legs and back. This soreness is at its worst during the winter months when the temperature drops. Team Nova developed a blanket that included small vibration motors and a heating element to ease Ellie’s aches and pains. They wanted to include both sensations for maximum relief. The team also wanted to include different quantities of heat output to account for the seasonal changes.

Team Nova was most excited about picking out the fabric for Ellie’s custom blanket. They scoured fabric retailers to find the perfect pattern. The team landed on a colorful fabric dotted with small images of various animals. They were inspired by Ellie’s bright personality and love for the computer game, Animal Crossing. They anticipated that this blanket would not only bring comfort to Ellie’s muscles but also spark joy. 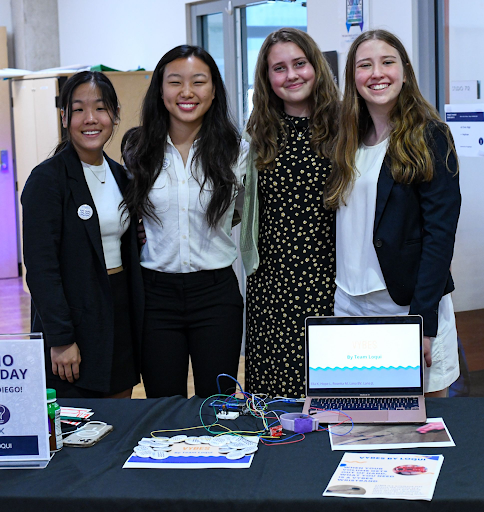 Megan, Team Loqui’s community partner, is a deaf actress. Upon learning about Megan’s life, Team Loqui sought to help Megan gauge her volume level so that she could continue to have a pleasant conversation with others even after the battery in her cochlear implant died. During one of the team’s meetings with her, Megan described how uncomfortable it is when she is speaking with someone but is not able to tell how loudly she’s speaking. She joked that her family would really appreciate it if there were a device that would let her know when she’s yelling.

Team Loqui got to work and quickly identified that their product would need to involve a microphone input and some sort of signal-giving output when the detected volume surpassed an established threshold. But what should they use for their output? Initially, they were playing around with LEDs and programming them to light up when the volume got too high. However, through the process of prototyping and testing, they concluded that this could be distracting and bring attention to the fact that Megan is experiencing this challenge. They landed on a small vibration motor. A little vibration that only Megan could feel was just the subtle notification Team Loqui was looking for. Their end product consisted of a microphone that Megan would wear on a necklace or clipped to her shirt paired with a bracelet that Megan would wear on her wrist that contained a small vibration motor. The vibration motor was programmed to buzz anytime Megan’s volume got too high. 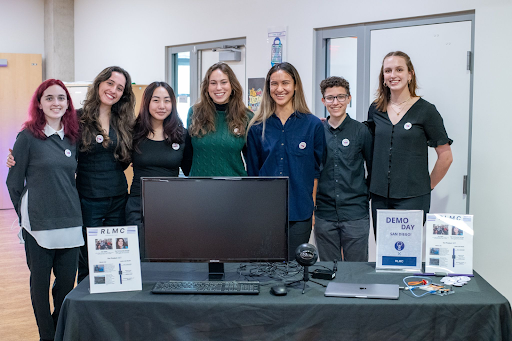 Team RLMC also worked with Megan. While getting to know each other and exchanging pleasantries during their first meeting over Zoom, the COVID-19 pandemic naturally came up. Megan spoke to some of the challenges that the pandemic brought up, namely the fact that mask wearing eliminated lip reading from her communication toolbox. She then went on to describe several other scenarios outside of the pandemic in which lip reading was not an option: doctor’s appointments, communicating over the telephone, etc. She acknowledged that when she has access to a translator, this is not an issue. However, access to a translator is not always an option and can be costly.

Team RLMC wanted to create a product that would help Megan understand others whenever lip reading and a translator were unavailable. They wanted to create a product so that she could communicate with others in any situation on her own. In their initial brainstorming, they envisioned a piece of wearable technology that would perform speech-to-text conversion in real time, allowing Megan to read what the person she is speaking to is saying as they are saying it.

Similar to Team Xandra, Team RLMC embarked on the challenge of speech-to-text conversion. They, too, demonstrated proof of concept of their idea using DeepSpeech on the Raspberry Pi, and they plan to continue developing their product (known as “SET”) during the next school year. 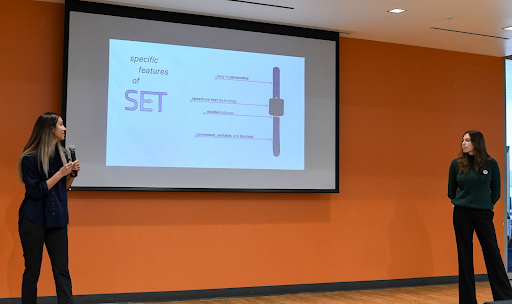 Through working with Megan, both Team Loqui and Team RLMC understood on a new level just how important communication is in daily life. There are many aspects of communication that the hearing community takes for granted every day, and these teams sought to bring awareness to challenges faced by the deaf community and develop products that would make communication easier for people with hearing impairments. Both teams will continue their work next year to create more sophisticated prototypes that will help them establish the viability of actually bringing their products to the market.

The world today is more connected than ever. However, despite access to computers, cellphones, and the internet, communication gaps still exist. A new generation of inventors is needed to solve our problems through thoughtful research and development. We need risk takers. Teams Xandra, Nova, Loqui, and RLMC all stepped up to this challenge. They have a vision and are willing to work to find ways to implement a solution.

All photos by Brendan Praniewicz for Project Invent.